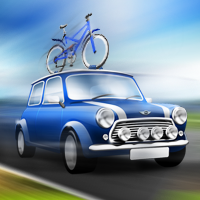 Last Friday, at the end of a small corporate party, when all other problems had been discussed, we suddenly began to debate such a weird question as “Is web development similar to bicycling or car driving?” The discussion was sparked by a comparison made in the last paragraph of Simple Website Promotion for Web Designers, as well as tweets about bikes by Veerle Pieters and images like this Vitamin bike. Some of the expressed statements seemed quite interesting, so I’ve gathered them below with literary editing.

“Cyclists” (C): Web designers and developers should be open to customers, design community, and new industry trends. It is just like bicycling – there is no barrier between you, people and nature, you feel the wind of changes more distinctly and earlier than in the closed space of a car.

“Automobilists” (A): Such software packages as Photoshop allow you to perform a bunch of design tasks by the “autopilot” because the system makes a lot of work itself or “drives” you step by step through the process. This resembles cars, not bikes.

C: Designers should “sit” over the technologies rather than deeply inside them. The designer’s talent is more important than an ability to implement something in Photoshop. And web designers and developers should always keep their creativity, knowledge, and skills in good shape. Just like in cycling. 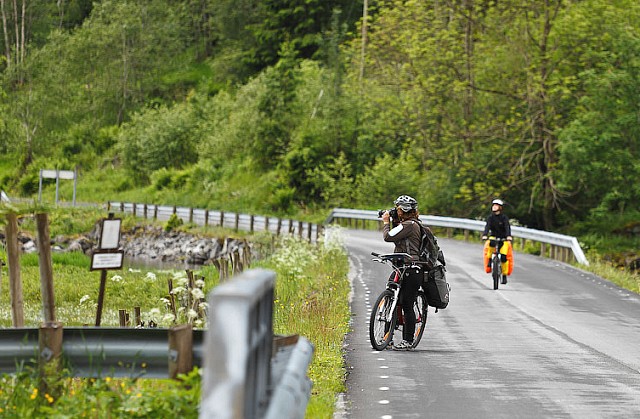 Climbing up Norwegian mountains, taking gorgeous photos and getting inspired to design.
Photo by Sergiy Lavryk, 2011

A: With today’s competition a designer should be quick and effective. Just compare a number of creative sites (e.g., presented in web galleries) and the total amount of resources on the Internet – the latter is larger because in many cases websites are serially built on the basis of WordPress, Drupal, etc. platforms with the help of standard templates, stock images/photos, icon or script kits, and designers simply customize them a little. Moreover, designers can use such specialized services as PSD to HTML conversion companies in order to avoid the necessity to learn deeply xHTML, CSS, JavaScript, etc. This is like a conveyor in an automobile plant with a lot of subcontractors and service centers.

C: Cycling is an example of a balanced concord of human efforts and up-to-date technologies which make our life better rather than destroy it and environment. This is the way of web design and development should go.

A: But what about accessibility and affordability? Even the top IT companies (let alone a host of others) continuously try to provide tools which allow a non-techie user to “develop” a website from scratch. Bikes require you be strong and trained, they are for enthusiasts and occasional exercises after main work, so it is like an exclusive, elitist design. To make a living, many prefer something easier to use. From this point of view cars are much more democratic, powerful and convenient to deal with.

C: In large cities bikes can take you to your place or office for the same time as cars or even faster. Bikes are as effective and popular as cars in many cases: And so on. Frankly, we didn’t reach a consensus (maybe because in reality web design is a little more complex phenomenon

What is your opinion?

Comments from Veerle Pieters and part of our conversation

Veerle Pieters: BTW about cycling and ‘accessibility and affordability’. I don’t really agree on that part… you don’t have to be trained or strong to be able to bike. Anyone can do it. You do it at your own pace, and the way you like it. If you do it regularly you just slowly grow and get stronger at it. So in that respect I don’t agree that you need to be trained. The range of people who bike is ‘everybody’ really. And even for people who are a bit too old or in a not well enough shape… or just plain lazy… there are these traditional city bikes with an electric motor that help you so you need to push less, so you can bike faster or climb a hill that you normally would not be able to for example

These bikes are very popular over here within the group of elderly people. They can now bike faster, and further etc.

Sean Brown, HTMLcut: Veerle, thank you for your time and comment. Reading your comment, I see that your words If you do it regularly you just slowly grow and get stronger at it could be definitely applied to web design and is a great word of advice to beginners. One more great idea that I like in your comment is that cycling – as well as design (graphic, web, furniture, home, etc design) – is open and available for people with a different level of their skills – not necessarily as a way to make a living but also as a way to get to know and express yourself and the world around you.

Veerle Pieters: It’s very wide as there are different disciplines and types or ways of cycling. Just look how many different types of bicycles there are. That says it all. It’s really for everybody and for all types of discipline and for young and old, the sporty and non-sporty type even.