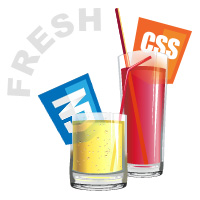 Many of us share links to interesting and useful resources with their followers on the social networks. I don’t know why but although usually such links are carefully selected, very few of them become popular.

Recently I’ve analyzed posts on our Google+ account and revealed that currently articles and blog posts on CSS3 coding tricks and tips on how to write efficient CSS3 code get a lot of (+1)‘s and reshares. So, I’ve decided to collect these resources together in one place. You can find them below. Hope you like them all :).

1). How to Create a Circular Progress Button
http://tympanus.net/codrops/2014/04/09/how-to-create-a-circular-progress-button/﻿
by Mary Lou: “A tutorial on how to implement the circular progress button concept by Colin Garven. We are using the SVG line drawing animation technique as described by Jake Archibald to animate the circular progress and provide a success and error state to indicate the final status.”

2). Creating a Border Animation Effect with SVG and CSS
http://tympanus.net/codrops/2014/02/26/creating-a-border-animation-effect-with-svg-and-css/﻿
by Mary Lou: “The website of Carl Philipe Brenner has some very creative and subtle animations and today we want to explore how to recreate a border animation effect using CSS transitions on SVG lines.”

4). CSS Variables – How To Use Custom Properties For Cascading Variables
http://www.vanseodesign.com/css/native-variables/﻿
by Steven Bradley: “Today I thought I’d run through how to use css variables as currently written in the spec.”

5). CSS Regions Considered Harmful
http://alistapart.com/blog/post/css-regions-considered-harmful﻿
by Håkon Wium Lie: “For those who believe in meaningful HTML tags, responsive web design, and compact CSS code, the introduction of CSS Regions is not good news.”

6). Efficient CSS selectors
https://plus.google.com/b/105478328706567690940/+AlinaBasova/posts/G4UxYdVbPVt
by Alina Basova: “That means browsers’ performance got better, but they still look at selector from right to left, even though it does this faster now…”

7). What Nobody Told You About Sass’s @extend
http://www.sitepoint.com/sass-extend-nobody-told-you/﻿
by Hugo Giraudel: “While most Sass users understand the basics of @extend, I feel there are some more obscure parts to it that are not as well known.”

8). What Can CSS Filters Do for You?
http://designmodo.com/css-filters/
by Paula Borowska: “CSS filters have been around for a while. They originated thanks to SVGs – Scalable Vector Graphics – in order to apply different image effects to vectors. Today, CSS filters are not limited to SVGs but can be used for images, text and everything else you can find on a web page.”

1). How to Evaluate Front-End Code for Inefficiencies
http://blog.teamtreehouse.com/common-css-front-end-code-mistakes﻿
by Guil Hernandez: “Using real-world examples found on several websites, let’s take a look at common ‘red flags’ to look for when writing code and evaluating its quality.”

2). The top 10 beginner programming mistakes
http://www.creativebloq.com/education/top-10-beginner-programming-mistakes-12135860﻿
by Iain Lobb: “When you’re learning to program, it goes without saying that you make a lot of mistakes. The problem is, sometimes you don’t know you’re making them. In my work teaching first year university students to code, I see the same errors come up over and over again, and they’re the same mistakes I made when I was learning. So here’s my list of the top beginner mistakes to avoid…”

3). 10 Programming Habits Developers Should Adopt
http://www.hongkiat.com/blog/developer-habits/﻿
by Alvaris Falcon: “Learning programming is fun and easy, but writing a good program can prove to be a daunting task. In most cases, we find ourselves constantly scratching our heads trying to understand the spaghetti code we wrote, or making lots of changes just because of a newly added minor feature.”

4). A Software Developer’s Reading List
http://stevewedig.com/2014/02/03/software-developers-reading-list/﻿
by Steve Wedig: “I have been trying to design a core curriculum for ‘modern’ software development by asking myself: What core concepts are required to be a world class software developer? What is the best book for introducing and teaching each concept? The result is a list of 16 essential software development concepts presented by 16 excellent books…”

5). Be a smart HTML/CSS coder, or die out
http://www.htmlcut.com/blog/be-smart-html-css-coder.html﻿
by Sean Brown: “Are coders an endangered species?”

6). The secret to keeping up with frontend technologies
http://www.creativebloq.com/web-design/frontend-rescue-21410749﻿
by Matt Griffin and Patrick Fulton: “Frontend design moves insanely fast, so how do you keep up? Here’s a site that’ll help you stay on top of things.”

About the Author
Sergiy Lavryk is the CEO of HTMLcut, a popular PSD to HTML5/CSS3 coding service. He is an experienced web and software developer with over 12+ years of practical apps creation.